The Comedies, being the First Volume of the Collected Plays

Lady Gregory first tried her hand at playwriting when she was almost fifty years old, and during the last thirty years of her life this late-flowering talent produced nearly fifty plays. These are published in four volumes: I, The Comedies; II, The Tragedies and Tragic-Comedies; III, Plays dealing with Wonder and the Supernatural; IV, Translations, Adaptations, and Col­laborations with W. B. Yeats and Douglas Hyde. (Lady Gregory's direct translations of Dr. Hyde's plays appear in her Poets & Dreamers).

This volume contains those plays by which she is probably best remembered and which are still performed after sixty years: Spread­ing the News, Hyacinth Halvey, The Jackdaw, The Rising of the Moon and The Workhouse Ward (this last giving rise to an anonymous parody, The Worked-Out Ward, A Sinn Féin Allegory, which is given in an appendix). They appeared in Lady Gregory's first volume of plays, Seven Short Plays, published in 1909 and dedicated to W. B. Yeats, ‘because you have taught me my trade’. Of her later comedies, The Bogie Men was re­vised after publication; the revised version being given in the body of the text while the first version is to be found in the Appendix. A Losing Game, the first version of her first play to be performed, Twenty Five, is also included among the Appen­dices.

There are also five plays written after 1916 which have not been published before: Michelin, The Meadow Gate, The Dispensary, The Lighted Window and The Shoelace. Visions and Beliefs in the West of Ireland Gods and Fighting Men: The Story of the Tuatha de Danaan and of the Fianna of Ireland The Tragedies and Tragic-Comedies, being the Second Volume of the Collected Plays The Wonder and Supernatural Plays, being the Third Volume of the Collected Plays Translations, Adaptations and Collaborations, being the Fourth Volume of the Collected Plays 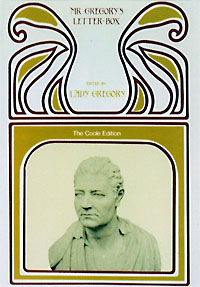