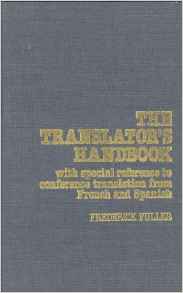 With special reference to conference translation from French & Spanish

The bibliography of translation today is vast, sophisticated, and, for the reader with a scholarly turn of mind, utterly absorbing. But try to cull from among the learned volumes on the history, the theory, the science, the analysis, the strategies, of translation, something that will be of immediate, practical use to the translator who is busy working on an economic report or a political speech, and you will almost certainly return empty-handed. Then look round for books with a more empirical, every-day approach to the subject, and again you are likely to find that, as the author of this Handbook discovered: ‘practical hints on the tricks of the translation trade are not easy to come by’.

The Translator's Handbook is intended to be just that — a vade-mecum for daily use, to be kept within easy reach. The old hand momentarily at a loss may find just the right synonym among the selection offered. The less experienced but eager translator will find here in addition a wealth of information on the day-to-day problems of turning French and Spanish into English, written in an easy, readable style that imparts instruction without appearing to do so.

Note for the American and Canadian User<br

Part I: Translating from French into English<br

Postlude: The Elements of Good Translation

Frederick Fuller studied Romance and Germanic philology with such eminent scholars as Allison Peers in Liverpool, Karl Vossler in Munich, Joseph Bedier at the Sorbonne, Andre Morize and Jeremiah Ford at Harvard. He was for some years Assistant Keeper at the British Library, and he worked as Language Supervisor in the BBC during the War and as British Council lecturer and music officer in Brazil, Argentina and Chile. His translations include The Enlargement of the European Communities (Puissochet) from French; Stravinsky (Vlad) from Italian; libretti and other musical texts, and poetry, into French, Spanish and Portuguese, and from these and many other languages, including the Scandinavian languages and Russian, into English.