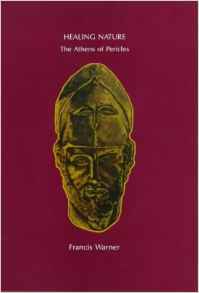 'Francis Warner has shown once more he is a masterful poet and dramatist. Healing Nature, his eleventh play, is his best work to date. The action centres round Pericles, the aristocratic general, commandingly played by Rob Smith, as he creates "an Athens all the world will imitate", only to see the tide of fortune turn and the empire fall into decay. Its exploration of the dilemmas facing empire-builders and empire- losers is original, thought-provoking, and relevant.

‘It is a compelling play which combines the grand, heroic drama of Marlowe's Tamburlaine with moments of exquisitely delicate lyric poetry and unexpected dashes of humour.' The Stage

'A real treat in poetry was to be had in the Sheldonian last night. This was the première performance of Healing Nature, by Francis Warner. . . The play is about the turmoil that the birth pangs of democracy bring to a city, and the revolution and hostilities that accompany it.

‘Francis Warner's play was safe in the hands of the Oxford University Dramatic Society, who, under the direction of Mark Payton, put on a classically Greek production. All brought out the Shakespearian quality of the play's verse and depth of meaning. And there could have been no better setting than the magnificent amphitheatre that is the Sheldonian.' Oxford Mail.