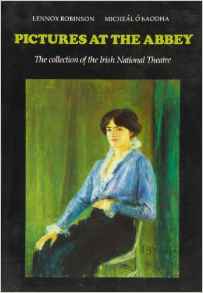 Pictures at the Abbey

When the Abbey Theatre was opened in 1904 the walls of its foyer were hung with portraits by, as W. B. Yeats put it, ‘a certain Irish artist’, actually his father, John Butler Yeats. Ever since then the theatre's collection of pictures has grown and there are now over sixty pieces by several renowned painters, depicting the members of the company, many of whom have achieved worldwide fame.

In the 1940's Lennox Robinson described the pictures then on view in the old Abbey Theatre in his charming 1946 essay,Pictures in a Theatre. This text is incorporated into Michael O hAodha's description of the collection and its origins. Pictures at the Abbey has sixty-four reproductions, twenty-eight in colour, of works by John Butler Yeats, his son Jack B. Yeats, Sean O'Sullivan, William Rothenstein, Robert Gregory, AE, Augustus John and other artists.

All the works in the collection are annotated in the descriptive list which concludes the book.

Pictures at the Abbey, the first fully documented account of this important body of work, is compiled by Michael Ó hAodha, who was Chairman of the National Theatre Society and who wrote several books on the history of the Irish Theatre.

Published in association with the National Theatre Society Limited.