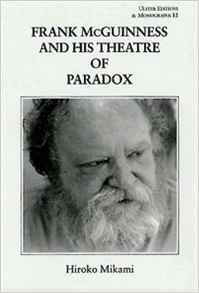 Frank McGuinness and His Theatre of Paradox

Frank McGuinness and His Theatre of Paradox is a critical study of one of the most important contemporary Irish dramatists. It offers an overview of the McGuinness’s drama from his early plays right up to the recent, Dolly West's Kitchen. The author has chosen to treat the plays thematically, rather than chronologically, which highlights the playwright's major preoccupations in the contexts of modern and contemporary Ireland. She positions McGuinness exactly as a representative of a dynamic creative intelligence fully alive to the various factors, undercurrents, issues, problems, and tensions that are being lived through in present-day Irish society, North and South.

1. Folk Memory as Lethal Cultural Weapon: Protestant Ireland vs. Catholic Ireland (Observe the Sons of Ulster Marching Towards the Somme, and Carthaginians);
2. Visualising McGuinness’s Verbal Theatre: Interpretation of Caravaggio’s Theatricality (Innocence);
3. ‘An Unhappy Marriage between Ireland and England’: A Post-Colonial Gaze at Ireland’s Past (Mary and Lizzie, Someone Who’ll Watch Over Me, and Mutabilitie);
4. ‘The Voices of the Voiceless’: Representation of Irish Women (The Factory Girls, Baglady, and The Hen House);
5. Families at War: McGuinness’s Irish Bad Comedy of Manners (The Bird Sanctuary, and Dolly West’s Kitchen);
Catalogue of the Tilling Archive of McGuinness material in the the Library at the University of Ulster, Coleraine.

Hiroko Mikami is Professor of English at Waseda University, Tokyo. She was a visiting research fellow at the Centre for Irish Literature and Bibliography, University of Ulster and obtained her Ph.D. on Frank McGuinness from University of Ulster where some of his typescripts and secondary materials are located in the Tilling Archive. She has translated many contemporary Irish plays into Japanese: Tom Murphy's Bailegangaire, A Thief of Christmas; Brian Friel's Freedom of the City, Making History; Thomas Kilroy's Double Cross, and Frank McGuinness's Innocence and Mutabilitie.