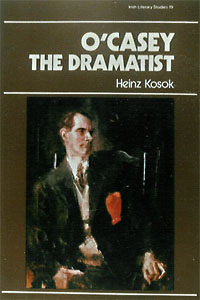 O’Casey, the Dramatist is the first study to analyse each of Sean O’Casey’s plays in the context of the whole body of his work. His first plays were performed by the Abbey Theatre in Dublin until it refused The Silver Tassie, a rejection that brought about a most acrimonious debate, broke up friendships, and caused O’Casey to sever his links with the Abbey. Its directors were unable to understand the first of his experimental plays, and could not appreciate its true quality. Thence­forth O'Casey’s writing developed along new lines, mostly away from his Irish roots.

In popular estimation his best plays are those of the Dublin years – The Shadow of a Gunman, Juno and the Paycock and The Plough and the Stars – but many of his later works are greatly undervalued; indeed The Silver Tassie, Within the Gates, Purple Dust, Red Roses for Me, Hall of Healing, Cock-a-doodle Dandy and The Bishop's Bonfire are all masterpieces of modern drama, as this study shows.

Professor Kosok considers all the twenty-three extant plays, tracing O'Casey's development as a playwright through a chronological study and show­ing that his work can be divided into five periods, which are considered in this volume under the headings ‘Dublin as a Mirror of the World’, 'Experiments’, ‘Ideology and Drama', ‘Ireland as a Microcosm', and ‘Bitterness and Recon­ciliation’. He ends this study with a section headed ‘Continuity and Originality' in which he briefly summarises the findings of previous scholarship, suggests some additional answers to general problems, and indicates some avenues for future research.