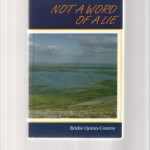 Not a Word of a Lie

£7.95
Author: Quinn Conroy Bridie
Genre: Autobiography and Biography
Tag: Not a Word of a Lie

Not a Word of a Lie is an evocative portrait of growing up in the West of Ireland. Recalling her childhood and youth in Duras, a narrow peninsula jutting out into Galway Bay, about four miles from the nearby town of Kinvara, Bridie Conroy-Quinn describes the small, self-contained farming community in which she grew up with affection and humour, but also with an acute understanding of the small tragedies and injustices that sometimes disturbed the normally tranquil pattern of the yearly round.

Bridie Quinn-Conroy was born and raised in Duras. Educated at Duras National School and Seamount College, she trained as a primary school teacher in Carysfort Training College, Dublin. She taught schools in South Galway and was Vice-President of Craughwell N.S. until she took early retirement in 1989. Married to Michael Conroy, she has four children.