In Memory of Barbara Hayley

This volume analyses the interplay between religion and society in Ireland and how Irish writing, whether poetry, prose, drama, sermon or pamphlet, has reflected that interplay, and how the idea of wholeness and integration, as part of the religious search, informs Irish writing.

Irish literature has been influenced by religion from the beginning. Writing itself came about as a result of the conversion to Christianity, because the early church brought with it a Latin orthography which the native men of learning adopted. Pagan beliefs and practices were assimilated into Christianity, but not entirely so: a theme that surfaces continually in Irish writing is the conflict between Pagan and Christian values. This tension is also an interaction: one of the characteristics of Irish literature of all periods is its capacity to retain pagan stories and modes of thought. This retention reflects a society which, while Christianised, has many roots in a pre-Christian Celtic past.

The essays follow a broadly chronological pattern covering every facet of the subject, starting with Paganism in early Ireland, and moving on to the literary uses of folk belief and religion in the 18th, 19th, and 20th centuries. 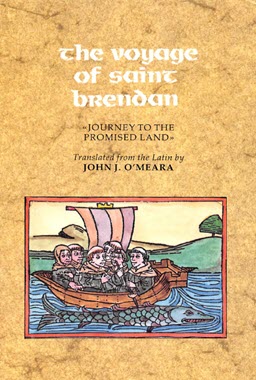 The Voyage of St. Brendan

Written in about AD800, Navigato Sancti Brendani Abbatis is one of the most famous and enduring stories of western Christendom. While the question whether Saint Brendan reached America remains a subject of controversy, the tale itself is of great interest – a strongly integrated text which derives from several centuries of Irish literary tradition. The text is illustrated by the relevant woodcuts from a German version of the tale which was printed in Augsburg in 1476.

John J. O’Meara has here translated one of the most famous and enduring stories of western Christendom, the Navigatio Sancti Brendani Abbatis, written in Ireland perhaps as early as the year 800. While the routes of Saint Brendan’s journeys remain a subject of controversy, the tale itself is of great interest – a strongly integrated text which derives from several centuries of Irish literary tradition.

The Voyage of Saint Brendan presents Professor O’Meara’s translation of the only scientific edition of the original Latin text, with his introduction, and is illustrated by the relevant woodcuts from a German version of the tale, Sankt Brandans Seefahrt,  printed in Augsburg in 1476. When this version was published By the Dolmen Press in 1975 it was acclaimed by critics on both sides of the Atlantic:

‘It’s a fascinating book’ (Quidnunc, The Irish Times); ‘has the  simplicity, the joyous naiveté, the suspension of reality which captivate the most sceptical reader of the Franciscan Fioretti and the same pervasive innocence  and fiery spirituality’ (The Irish Independent); ‘valuable both as scholarship and literature’ (The Malahat Review); ‘A worthwhile book in every respect‘ (Choice, U.S.A.).

It was designed by Liam Miller. The Holy Wells of Ireland

Holy wells have been a feature of the religion of the Irish people for longer than records have existed, and while pilgrimages to them are not as common as in the last centuries, many wells are still visited, particularly on the Saints’ or ‘Pattern’ Days, and even now new wells occasionally appear.

In this survey Dr Patrick Logan, author of The Old Gods, Irish Country Cures and Fair Day: The Story of Irish Fairs and Markets, describes many of those wells that are still visited, detailing the features of the pilgrimage and the benefits obtained, together with the legends attached to the wells, the saints they are dedicated to and their Pattern Days, the sites, trees and stones associated with them, and fish that some of them have; he also gives information about the holy islands that have wells.

This collection does not attempt to describe every holy well in Ireland – an impossible task with so many – but Dr Logan has gathered together a collection of the most representative and interesting ones that visitors, pilgrims, and historians, as well as the local people will find it fascinating to read about.

‘What the author has done is to collect . . . a huge amount of important material about the wells, their history, the saints to whom they are dedicated, and their accessories, so to speak, such as the sites, the fish that some still nurture, and even such fascinating things as "swearing stones" and "cursing stones" . . . . A volume that is much needed and that will be a source of fascination to scholars and local historians alike for many years to come.’ Cork Examiner

'Dr Logan has succeeded in packing a great volume of interesting and useful information into this book.' Irish Independent With a Foreword by T. R. Henn

Studies and Translations from the Irish, including nine plays by Douglas Hyde

In Poets and Dreamers Lady Gregory has gathered together a number of essays and translations she had made from the Irish of Douglas Hyde, An Craoibhin Aoibhinn, ‘the Sweet Little Branch’, who was founder and President of the Gaelic League at the time and later to be the first President of the Republic of Ireland.

Lady Gregory has also written about other poets in this volume, notably Raftery, who was the model for Yeats’s Red Hanrahan, and also writes about West Irish ballads, and those by Jacobite and Boer and that beautiful poem by the expatriate Shemus Cartan, ‘A Sorrowful Lament for Ireland’.

Her other essays are covered by the Dreamers part of the title, ‘Mountain Theology’, ‘Herb Healing’ and ‘Workhouse Dreams’ among them. This edition contains a further five plays by Hyde, translated by Lady Gregory, three of which have not hitherto been published.

The Ap­pendices contain a number of early versions of poems and articles and includes ‘Dreams that have no moral’ by W. B. Yeats. This has been added from his Celtic Twilight (1902) as an Appendix in order to give an example as to how Lady Gregory worked together with him in providing him with material for his volumes. Lady Gregory refers to the story in ‘Workhouse Dreams’.

The Editors have also added a quant­ity of her revisions and an essay, ‘Cures by Charms’, which first appeared in the Westminster Budget with two of the other essays in this volume, but which was not included in the first edition. With a Foreword by Daniel Murphy

Here are the myths and legends of early Ireland as translated and written down by Lady Gregory, and published in 1902. This volume has a Preface by W.B. Yeats, who described it as `the best book that has ever come out of Ireland', and `the chief part of Ireland's gift of the imagination of the world'. Legends include: the Hound of Cuchulain and the Men of the Red Branch of Ulster.

Contents
Dedication of the Irish Edition to the People of Kiltartan
Foreword by Daniel Murphy
Preface. Signed W. B. Yeats, March 1902.
Birth of Cuchulain
Boy Deeds of Cuchulain
The Courting of Emer
Bricriu’s Feast, and the War of the Words of the Women of Ulster
The Championship of Ulster
The High King of Ireland
Fate of the Children of Usnach
The Dream of Angus
Cruachan
The Wedding of Maine Morgor
The War for the Bull of Cuailgne
The Awakening of Ulster
The Two Bulls
The Only Jealousy of Emer
Advice to a Prince
The Sons of Doel Dermai
Battle of Rosnaree
The Only Son of Aoife
Death of Cuchulain
Note by W. B. Yeats on The Conversation of Cuchulain and Emer. (Pages 32-34) Tales of the West of Ireland

During a period spent in the west of Ireland in 1964-65, Gertrude Horgan discovered the tales which James Berry had contributed to a local paper, The Mayo News, during the last years of his life, and decided to edit the present collection, first published by the Dolmen Press in 1966. In doing this she added an important body of work to 19th century Irish literature and rescued the author from oblivion.

Like William Carleton, James Berry, a native of County Mayo, came from peasant stock. He spent his whole life in the West until his death at the age of seventy-two in 1914. The material of his tales comes from the people of Mayo and Galway, and introduces the smugglers, the packmen and the raparees of the West. Mainly handed down to him by word of mouth, they tell of poor communities living in a bleak and beautiful countryside against a background of secret societies, man-hunts, smuggling, murders, wakes, rebellion and starvation. Some go back hundreds of years, evoking the legendary past of Connemara, while others are Berry’s own tales of the Ireland of his youth when the shadow of the Famine hovered over the West.

Gertrude Horgan was, until her retirement, Professor of English at Aquinas College, Grand Rapids, Michigan.

‘When I left down the book, I had a deeper understanding of rural Ireland in the 19th century than I ever had before, because in Berry’s tales it comes to meet the reader, open-eyed and unembarrassed.’  Augustine Martin in The Irish Press

‘A book I would wholeheartedly recommend.’ Eileen O’Brien in The Irish Times These ten original tales, some dating from the 11th century, have been painstakingly unearthed and written up by Ronald Barnes. Several of these stories surfaced in Yorkshire, whence Welsh monks had fled during religious purges, and are published for the first time. These have been relatively unaltered by retelling over the centuries while others are attributed to bards who changed the story lines almost beyond recognition.

There was an abundance of other legends, too, many attributed to resourceful bards who, over the centuries, changed the story lines almost beyond recognition.

Some of the greatest legends, particularly those based upon proven historical facts, owe their survival to monks and others who fled to Yorkshire during religious purges. There they lay dormant and thus escaped the ravages of repetition.

Several of these wonder tales, dating from the 11th to 13th centuries, resurfaced in 1794 when they were recounted to a Yorkshire scholar in what is almost certainly their original form. Now they are retold once more, in print now for the first time. Included are:
The Legend of the Triple Sacrifice,
The Three Sisters of Ardudwy,
The Maidens of the Sea Marsh,
Roderick of Anglesea,
Mhaira and Madoc,
Owain Gwynedd's Silver Dagger,
The Lake of the Fair Ones,
The Dyn Hysbys,
The Legend of Beddgelert and
The Black Bull of Gwynedd.

During the second World War, while the author was seconded to the Indian Army, he became a regular contributor to The Illustrated Weekly, The Statesman, The Onlooker and The Times of India, winning the Literary Grand Prix in the Arts in Industry Exhibition. Throughout the campaign in Burma he commanded the Air Support Signals prior to serving in the 14th Army Staff, where he became interested in Indo-Celtic mythology.

After the war he returned to England to take up an Intelligence appointment on the Imperial General Staff. Later, in civilian life, he set up his own business which left little time for writing, until his retirement.  He is adamant that he will never undertake another challenge like Great Legends of Wales, which took five years to research.